This spring I am on part time parental leave with my son, and I have taken the opportunity to reshape this web site a bit – after all its design has not been updated since I launched the site in 2010. With the new site, I want to extend the scope of the web page a bit, focusing more on the lab I am setting up at the University of Gothenburg and less on myself alone. This will be a bit by bit process, and as you will notice most of the content does not yet reflect this change (yet).

The fact that I am on part-time parental leave (actually more like “most-time”) means that I will be slower than usual at responding to e-mails until (at least) the beginning of June. It also (sadly) means that I will have to decline a lot of nice invitations and proposals, or at least move them into the future when possible.

Finally, here’s a few things that will happen this year regardless. In April (16th to 18th), I will be at ICOHAR in Utrecht, where I will give a talk in a session on the role of the environment in the spread of antimicrobial resistance. Then in June, I will attend ASM Microbe in San Fransisco (June 20-24), where I will co-chair a session on Environmental Resistomes together with Ashley Shade. In this session I will also give a talk on the effect of antibiotics on interactions in microbial communities. However, I will not attend EDAR-5 in Hong Kong this year – there simply wasn’t time to fit that into the agenda as well. (Also, I am trying to cut down on air travel which contributed to the decision not to go this year.)

Reflections from the NGS Congress 2016

As the 8th Next Generation Sequencing Congress in London is drawing to a close as I write this, I have a few reflections that might warrant sharing. The first thing that has been apparent this year compared to the two previous times I have visited the event (in 2012 and 2013) is that there was very little talk about where Illumina sequencing is heading next. Instead the discussion was about the applications of Illumina sequencing in the clinical setting; so apparently this is now so mainstream that we only expect slow progress towards longer reads. Apart from that, Illumina is a completed, mature technology. Instead, the flashlight is now pointing entirely towards long-read sequencing (PacBio, NanoPore) as the next big thing. However, the excitement around these technologies has also sort of faded compared to in 2013 when they were soon-to-arrive. Indeed, it seems like there’s not much to be excited about in the sequencing field at the moment, or at least Oxford Global (who are hosting the conference) has failed to get these technologies here.

What also strikes me is the vast amounts of talk about RNAseq of cancer cells. The scope of this event has narrowed dramatically in the past three years. Which makes me substantially less interested in returning next year. If there is not much to be excited about, and the focus is only on cancer sequencing – despite the human microbiota being a very hot topic at the moment – what is the reason for non-cancer researchers to come to the event? There will need to be a stark shift towards another direction of this event if the arrangers want it to remain a broad NGS event. Otherwise, they may just as well go all in and rename the event the Next Generation Sequencing of Cancer Congress. But I hope they choose to widen the scope again; conferences discussing technology as a foundation for a variety of applications are important meeting points and spawning grounds for novel ideas.

I just want to highlight that the paper on strategies to improve database accuracy and usability we recently published in Proteomics (1) has been included in their most recent issue, which is a special issue focusing on Data Quality Issues in Proteomics. I highly recommend reading our paper (of course) and many of the other in the special issue. Happy reading!

On another note, I will be giving a talk next Wednesday (October 5th) on a seminar day on next generation sequencing in clinical microbiology, titled “Antibiotic resistance in the clinic and the environment – There and back again“. You are very welcome to the lecture hall at floor 3 in our building at Guldhedsgatan 10A here in Gothenburg if you are interested! (Bear in mind though that it all starts at 8.15 in the morning.)

Finally, it seems that I am going to the Next Generation Sequencing Congress in London this year, which will be very fun! Hope to see some of you dealing with sequencing there!

Presentation on biocide and metal conference

Conference on antibiotic co-selection by biocides and metals

The Royal Swedish Academy of Sciences (KVA) is, together with Joakim Larsson, arranging a conference on the mechanisms and evidence for the involvement of metals and biocides in selection of antibiotic resistant bacteria. Several experts from around Europe will attend and give talks, including for example Dan Andersson, Kristian Brandt, Teresa Coque, Will Gaze, Åsa Melhus and Chris Rensing. The symposium is open to everyone and is free of charge (although registration is binding).

The conference take place between 15th and 16th of March, at The Royal Swedish Academy of Sciences’ facilities at Lilla Frescativägen in Stockholm. And you should join us; register here!

I have had the pleasure to be chosen as a speaker for next week’s (ten days from now) Swedish Bioinformatics Workshop. My talk is entitled “Turn up the signal – wipe out the noise: Gaining insights into bacterial community functions using metagenomic data“, and will largely deal with the same questions as my talk on EDAR3 in May this year. As then, the talk will highlight the some particular pitfalls related to interpretation of data, and exemplify how flawed analysis practices can result in misleading conclusions regarding community function, and use examples from our studies of environments subjected to pharmaceutical pollution in India, the effect of travel on the human resistome, and modern municipal wastewater treatment processes.

The talk will take place on Thursday, September 24, 2015 at 16:30. The full program for the conference can be found here. And also, if you want a sneak peak of the talk, you can drop by on Friday 13.00 at Chemistry and Molecular Biology, where I will give a seminar on the same topic in the Monthly Bioinformatic Practical Meetings series.

Late last year, an opinion paper by José Martínez, Teresa Coque and Fernando Baquero was published in Nature Reviews Microbiology (1). In this paper, the authors present a system – resistance readiness conditions (RESCon) – for ranking the risks associated with the detection of antibiotic resistance genes. They also outline the obstacles associated with determining risks presented by antibiotic resistance genes in environmental microbial communities in terms of their potential to transfer to human pathogens. Generally, I am very positive about this paper, which I think is a must-read for anyone who works with antibiotic resistance genes in metagenomes, regardless of it they stem from the human gut or the external environment.

There is, however, one very important aspect that struck me and many other members of our research group as curious: the proposed system assign antibiotic resistance genes already present on mobile genetic elements in human pathogens to the highest risk category (RESCon 1), while resistance genes encoding novel resistance mechanisms not yet been found on mobile elements in a pathogen are considered to be part of lower risk categories. We believe that this system will overestimate the risks associated with well-known resistance factors that are already circulating among human pathogens and under-appreciate the potentially disastrous consequences that the transfer of previously unknown resistance determinants from the environmental resistome could have (exemplified by the rapid clinical spread of the NDM-1 metallo-beta-lactamase gene (2,3)).

In our response, we also stress that the abundances of resistance genes, and not only their presence, should be accounted for when estimating risks (although that last point might have been slightly obscured due to the very low word limit). In other words, we think that identifying environmental hotspots for antibiotic resistance genes, where novel resistance genes could be selected for (6,7,8), is of great importance for mitigating public health risks related to environmental antibiotic resistance. Please read our full thoughts on the matter in Nature Reviews Microbiology.

Similar issues will be touched upon in my talk at the EDAR2015 conference later in May. Hope to see you there!

Talk on the EDAR2015 conference

I will be giving a talk at the Third International symposium on the environmental dimension of antibiotic resistance (EDAR2015) next month (five weeks from now. The talk is entitled “Turn up the signal – wipe out the noise: Gaining insights into antibiotic resistance of bacterial communities using metagenomic data“, and will deal with handling of metagenomic data in antibiotic resistance gene research. The talk will highlight the some particular pitfalls related to interpretation of data, and exemplify how flawed analysis practices can result in misleading conclusions regarding antibiotic resistance risks. I will particularly address how taxonomic composition influences the frequencies of resistance genes, the importance of knowledge of the functions of the genes in the databases used, and how normalization strategies influence the results. Furthermore, we will show how the context of resistance genes can allow inference of their potential to spread to human pathogens from environmental or commensal bacteria. All these aspects will be exemplified by data from our studies of environments subjected to pharmaceutical pollution in India, the effect of travel on the human resistome, and modern municipal wastewater treatment processes.

The talk will take place on Monday, May 18, 2015 at 13:20. The full scientific program for the conference can be found here. Registration for the conference is still possible, although not for the early-bird price. I look forward to see a lot of the people who will attend the conference, and hopefully also you!

I would like to bring your attention to that the abstract deadline for the Swedish Bioinformatics Workshop held in Gothenburg in October has been extended to September 15. So hurry on and contribute with your latest research, we look forward to get to know what you’re doing!

Heading to Seoul for ISME15 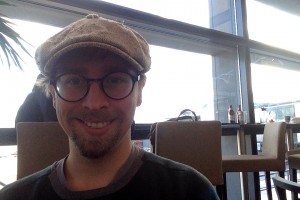 Finally, I am at the airport waiting for the plane to Beijing, and tomorrow, the plane to Seoul. I will spend next week at the ISME15 conference, which will be awesome. I hope to meet as many of you there as possible!

(And on a side note, if I don’t answer mails it might be due to that the conference wifi might be overcrowded. They warned us about this potential shortcoming of the conference center…)