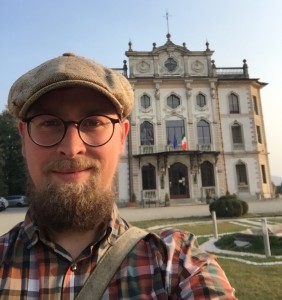 2017 has been a very intense year. It started with that my wife defended her PhD thesis in January (on chemical recycling of textiles). Then in February, my opinion paper on antibiotic resistance in the food supply chain was published in Current Opinion in Food Science. In March, one of the long-running projects in the Joakim Larsson lab came to a close with the publication on whether copper-based boat paints can select for antibiotic resistance. I also got the opportunity to discuss our findings on resistance genes in Beijing smog on a webinar organised by Healthcare Without Harm entitled “The (un)recognised pathways of AMR: Air pollution and food“. Later in the spring, I also participated in the Gothenburg Science Festival – by riding the ferris wheel at Liseberg together with information hungry strangers. A quite cool concept which I will miss being able to do in Wisconsin in 2018. (Another fun research dissemination activity can be to explain your research to a five-year-old.)

In June, one of two review papers that came out of the work with my PhD thesis frame was published in Journal of Antimicrobial Chemotherapy. This paper was on best practices for metagenomic analysis of resistance genes in different types of communities, and contains lots of handy information which we have learnt about over the years. This was followed by a paper that has been in the workings since at least 2013; a collaboration with Kaisa Thorell on the transcriptomes of Helicobacter pylori during progression towards stomach cancer. The most radical finding of this study might be the identification of transcriptionally active Helicobacter in patients that were classified as non-infected by traditional methods.

On the first of August, I formally started my new position as a non-tenured assistant professor at the same department as I did my PhD studies. I will be employed throughout 2020 and will be doing a lot of the same work that I have already been doing (antibiotic resistance, taxonomy, metagenomics) but with a stronger emphasis on community interactions, colonization and invasion. The first thing I did in this position was to travel to Madison in the US, where I will be spending 2018 in Jo Handelsman’s lab. In early August, I also had a very short paper describing the Calanus glacialis mitochondrial genome published, a project mainly driven by Marvin Choquet at Nord University in Bodø.

During the autumn, two very nice papers on prediction of novel resistance genes in which I have played minor roles were published: one on qnr genes and one describing 76 novel metallo-beta-lactamases. The latter received quite a bit of media attention which is always nice. We also published a (in my own, biased, opinon) very good review paper on environmental factors affecting the development of antibiotic resistance in FEMS Microbiology Reviews, which was later selected as an Editor’s choice article. Together with Lina Gunnarsson and Joakim Larsson, I finally got a project that has been lying around for a very long time published in Journal of Cleaner Production. In this study, we looked at where drugs are produced and how the pricing and branding of drugs reflect which country produced the active ingredient (and indirectly the production conditions). Me and Joakim Larsson also engaged in a debate on what should guide environmental risk assessment and management of antibiotics, where we argue that suggested emission limits must be rooted in clearly stated protection goals.

Another project that finally saw publication was the study of Blasocystis subtypes in the traveler metagenomes that we published in 2015. This study was done in collaboration with colleagues in Umeå, foremost Dr. Joakim Forsell. Speaking of metagenomes, I also published a book chapter on strategies for metagenomic analyses of taxonomy and gene functions. In the last month of 2017, I also got a grant for sequencing money worth 850,000 SEK from SciLifeLab (special highlight here), which I am very thankful for.

Both ITSx and Metaxa2 have seen major updates with many new features. ITSx saw performance increases and improved ITS detection among fungi and chlorophyll. It was also added to the Bioconda repository later this year. Metaxa2 was brought to version 2.2 and now includes a database builder that will enable the construction of completely custom databases of barcoding regions. More on that in the year to come…

I did a lot of traveling in 2017. I went to Italy three times, two for workshops organized by the JRC on how sequencing can inform the European coordinated action plan against antimicrobial resistance (in March and October), and one time for vacation on Sicily with my family. Then in April, I attended a UNITE annotation workshop in Aberdeen together with Henrik Nilsson and Christian Wurzbacher (and a lot of other people of course). In August and early September, I spent a month in the US preparing for my project with Jo Handelsman, and attending the EDAR conference in Lansing, Michigan. Plus a set of very nice vacation days in Munising in northern Michigan with parts of Joakim Larsson’s research group. And of course, I’ve also been back and forth to Stockholm a few times. So all in all, my carbon dioxide release consciousness is not very happy after this year…

It has been a very very nice, but also a very very intense year. I now look forward to spend a year in the lab of Jo Handelsman at the University of Wisconsin-Madison. I don’t know exactly what this year will bring, but it will be nice to dig down into the mechanisms behind colonization and invasion in microbial communities. But, as always, there is a number of studies in the pipeline already. Some of the most exciting: papers describing the updates to Metaxa2, papers on minimal selective concentrations for antibiotics, and a slew of studies on antibiotic resistance risks and tools for taxonomic analysis. 2018 will be an exciting year!