I will be giving talks on data driven life science – specifically on antibiotic resistance and pathogenicity – on two different events organised within the Data Driven Life Science program (DDLS) in the next month. First up is on the DDLS Annual Conference, coming up already next week (15-16 November). Here, I will give a talk on the evolution of pathogenicity, outlining some of our ongoing work towards finding novel virulence factors. There will also be talk from the other DDLS fellows, as well as Samuli Ripatti and Cecilia Clementi.

On-site registration closes on November 9 so make sure to grab one of the last spots at this exciting event! Register here – online attendance is also possible for those who don’t want to travel to Stockholm.

Then in December, I will be talking at the Data-driven Epidemiology and biology of infections Research Area Symposium in Gothenburg on how to predict the disease threats of the future. This symposium takes place in Gothenburg on December 7 to 8, but again online participation is also possible. Aside from me, Nicholas Croucher will talk about genomic surveillance data and bacterial epidemiology, Bill Hanage will talk about decisions in an imperfect world and Tove Fall will talk about dynamic disease surveillance. There will also be talks about the new DDLS fellows in epidemiology and infection biology, which is what I am perhaps most excited about: Thomas van Boeckel, Luisa Hugerth and Laura Carroll! It seems like registration has not yet opened for this event, but keep monitoring this site.

I look forward to see you at these events!

Last Friday, our research group moved into our new facilities at the Department of Infectious Diseases. I am very happy with my new room and my new view, both depicted below. 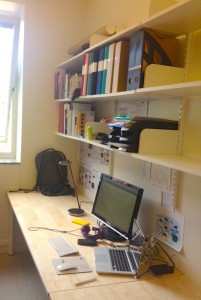 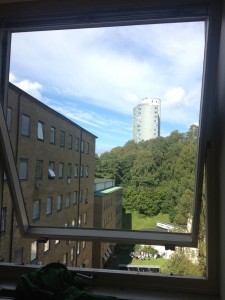 Our new affiliation is:

It seriously worries me that a number of indications recently have pointed to that the heavy use of antibiotics does not only drive antibiotic resistance development, but also the development towards more virulent and aggressive strains of pathogenic bacteria. First, the genome sequencing of the E. coli strain that caused the EHEC outbreak in Germany in May revealed not only antibiotic resistance genes, but also is also able to make Shiga toxin, which is causes the severe diarrhoea and kidney damage related to the haemolytic uremic syndrome (HUS). The genes encoding the Shiga toxin are not originally bacterial genes, but instead seem to originate from phages. When E. coli gets infected with a Shiga toxin-producing phage, it becomes a human pathogen [1]. David Acheson, managing director for food safety at consulting firm Leavitt Partners, says that exposure to antibiotics might be enhancing the spread of Shiga toxin-producing phage. Some antibiotics triggers what is referred to as the SOS response, which induces the phage to start replicating. The replication of the phage causes the bacteria to burst, releasing the phages, and with them the toxin [1].

Second, there is apparently an ongoing outbreak of scarlet fever in Hong Kong. Kwok-Yung Yuen, microbiologist at the University of Hong Kong, has analyzed the draft sequence of the genome, and suggests that the bacteria acquired greater virulence and drug resistance by picking up one or more genes from bacteria in the human oral and urogenital tracts. He believes that the overuse of antibiotics is driving the emergence of drug resistance in these bacteria [2].

Now, both of these cases are just indications, but if they are true that would be an alarming development, where the use of antibiotics promotes the spread not only of resistance genes, impairing our ability to treat bacterial infections, but also the development of far more virulent and aggressive strains. Combining increasing untreatability with increasing aggressiveness seems to me like the ultimate weapon against our relatively high standards of treatment of common infections. Good thing hand hygiene still seems to help [3].