Last week, a paper resulting from a collaboration with Stefanie Heß and Viktor Jonsson was published in Environmental Science & Technology. In the paper, we build a quantitative model for the emergence of antibiotic resistance genes in human pathogens and populate it using the few numbers that are available on different processes (bacterial uptake, horizontal gene transfer rates, rate of mobilization of chromosomal genes, etc.) in the literature (1).

In short, we find that in order for the environment to play an important role in the appearance of novel resistance genes in pathogens, there needs to be a substantial flow of bacteria from the environment to the human microbiome. We also find that most likely the majority of resistance genes in human pathogens have very small fitness costs associated with them, if any cost at all.

This paper has a quite interesting backstory, beginning with me having leftover time on a bus ride in Madison (WI), thinking about whether you could quantize the conceptual framework for resistance gene emergence we described in our 2018 review paper in FEMS Reviews Microbiology (3). This spurred the first attempt at such a model, which then led to Stefanie Heß and me applying for support from the Centre for Antibiotic Resistance Research at the University of Gothenburg (CARe) to develop this idea further. We got this support and Stefanie spent a few days with me in Gothenburg developing this idea into a model we could implement in R.

However, at that point we realized we needed more modeling expertise and brought in Viktor Jonsson to make sure the model was robust. From there, it took us about 1.5 years to refine and rerun the model about a million times… By the early spring this year, we had a reasonable model that we could write a manuscript around, and this is what now is published. It’s been an interesting and very nice ride together with Stefanie and Viktor!

The podcast was recorded on March 18, 2021. If you want to reach out to us with comments, suggestions, or other feedback, please send an e-mail to podcast at microbiology dot se or contact @bengtssonpalme via Twitter. The music that can be heard on the pod is composed by Johan Bengtsson-Palme and is taken from the album Cafe Phonocratique.

This is the fifth episode of the Microbiology Lab Pod and has been lying around on my computer almost finished for way too long. It was recorded on September 23, and the bigger-than-ever-before crew (Johan Bengtsson-Palme, Emil Burman, Haveela Kunche, Anna Abramova, Marcus Wenne, Sebastian Wettersten and Mahbuba Lubna Akter) is joined by Fanny Berglund to discuss computational discovery of novel resistance genes. We also discuss antibiotic resistance mechanisms, particularly in Pseudomonas aeruginosa.

The podcast was recorded on September 23, 2020. If you want to reach out to us with comments, suggestions or other feedback, please send an e-mail to podcast at microbiology dot se or contact @bengtssonpalme via Twitter. The music that can be heard on the pod is composed by Johan Bengtsson-Palme and is taken from the album Cafe Phonocratique.

In the second episode of Microbiology Lab Pod, a crew consisting of Johan Bengtsson-Palme, Emil Burman, Haveela Kunche and Anna Abramova discusses how to identify novel resistance genes with our special guest Marlies Böhm. We also talk about bacterial virulence: how do bacteria become virulent, how do virulence relate to competition, how do bacteria evade the immune system and can we attenuate virulence using fatty acids?

The podcast was recorded on May 7, 2020. If you want to reach out to us with comments, suggestions or other feedback, please send an e-mail to podcast at microbiology dot se or contact @bengtssonpalme via Twitter. The music that can be heard on the pod is composed by Johan Bengtsson-Palme and is taken from the album Cafe Phonocratique.

Conferences and a PhD position

Here’s some updates on my Spring schedule.

On March 19, I will be presenting the EMBARK program and what we aim to achieve at a conference organised by the Swedish Medical Products Agency called NordicMappingAMR. The event will feature an overview of existing monitoring of antibiotics and antibiotic resistant bacteria in the environment. The conference aims to present the results from this survey, to listen to experts in the field and to discuss possible progress. It takes place in Uppsala. For any further questions, contact Kia Salin at NordicMappingAMR@lakemedelsverket.se

Then on May 18 to 20 I will participate in the 7th Microbiome & Probiotics R&D and Business Collaboration Forum in Rotterdam. This industry/academia cross-over event focuses on cutting-edge microbiome and probiotics research, and challenges and opportunities in moving research towards commercialisation. I will talk on the work we do on deciphering genetic mechanisms behind microbial interactions in microbiomes on May 20.

And finally, I also want to bring the attention to that my collaborator Erik Kristiansson has an open PhD position in his lab. The position is funded by the Environmental Dimensions of Antibiotic Resistance (EDAR) research project, aiming to describe the environmental role in the development and promotion of antibiotic resistance. The focus of the PhD position will be on analysis of large-scale data, with special emphasis on the identification of new forms of resistance genes. The project also includes phylogenetic analysis and development of methods for assessment of gene evolution. More info can be found here.

The outcomes from a workshop arranged by JPIAMR, the Swedish Research Council (VR) and CARe were just published as a short review paper in Environment International. In the paper, which was mostly moved forward by Prof. Joakim Larsson at CARe, we describe four major areas of knowledge gaps in the realm of environmental antibiotic resistance (1). We then highlight several important sub-questions within these areas. The broad areas we define are:

Although much has been written on the topic before (e.g. 2-12), I think it is unique that we collect and explicitly point out areas in which we are lacking important knowledge to build accurate risk models and devise appropriate intervention strategies. The workshop was held in Gothenburg on the 27–28th of September 2017. The workshop leaders Joakim Larsson, Ana-Maria de Roda Husman and Ramanan Laxminarayan were each responsible for moderating a breakout group, and every breakout group was tasked to deal with knowledge gaps related to either evolution, transmission or interventions. The reports of the breakout groups were then discussed among all participants to clarify and structure the areas where more research is needed, which boiled down to the four overarching critical knowledge gaps described in the paper (1).

This is a short paper, and I think everyone with an interest in environmental antibiotic resistance should read it and reflect over its content (because, we may of course have overlooked some important aspect). You can find the paper here.

Myself, Joakim Larsson and Erik Kristiansson have written a review on the environmental factors that influence development and spread of antibiotic resistance, which was published today in FEMS Microbiology Reviews. The review (1) builds on thoughts developed in the latter parts of my PhD thesis (2), and seeks to provide a synthesis knowledge gained from different subfields towards the current understanding of evolutionary and ecological processes leading to clinical appearance of resistance genes, as well as the important environmental dispersal barriers preventing spread of resistant pathogens.

Towards the end of the paper, we suggest certain environments that seem to be more important from a risk management perspective. We also discuss additional problems linked to the development of antibiotic resistance, such as increased evolvability of bacterial genomes (5) and which other types of genes that may be mobilized in the future, should the development continue (1,6). In this review, we also further develop thoughts on the relative risks of re-recruiting and spreading well-known resistance factors already circulating in pathogens, versus recruitment of completely novel resistance genes from environmental bacteria (7). While the latter case is likely to be very rare, and thus almost impossible to quantify the risks for, the consequences of such (potentially one-time) events can be dire.

I personally think that this is one of the best though-through pieces I have ever written, and since it is open access and (in my biased opinion) written in a fairly accessible way, I recommend everyone to read it. It builds on the ecological theories for resistance ecology developed by, among others, Fernando Baquero and José Martinez (8-13). Over the last year, it has been stressed several times at meetings (e.g. at the EDAR conferences in August) that there is a need to develop an ecological framework for antibiotic resistance genes. I think this paper could be one of the foundational pillars on such an endeavor and look forward to see how it will fit into the growing literature on the subject! 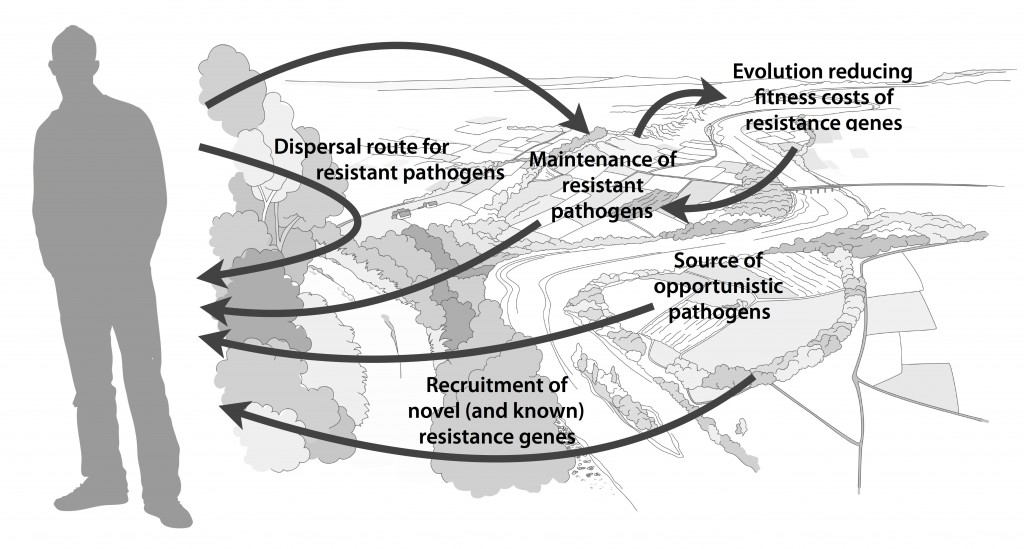 Today, Microbiome put online a paper lead-authored by my colleague Fanny Berglund – one of Erik Kristiansson‘s brilliant PhD students – in which we identify 76 novel metallo-ß-lactamases (1). This feat was made possible because of a new computational method designed by Fanny, which uses a hidden Markov model based on known B1 metallo-ß-lactamases. We analyzed over 10,000 bacterial genomes and plasmids and over 5 terabases of metagenomic data and could thereby predict 76 novel genes. These genes clustered into 59 new families of metallo-β-lactamases (given a 70% identity threshold). We also verified the functionality of 21 of these genes experimentally, and found that 18 were able to hydrolyze imipenem when inserted into Escherichia coli. Two of the novel genes contained atypical zinc-binding motifs in their active sites. Finally, we show that the B1 metallo-β-lactamases can be divided into five major groups based on their phylogenetic origin. It seems that nearly all of the previously characterized mobile B1 β-lactamases we identify in this study were likely to have originated from chromosomal genes present in species within the Proteobacteria, particularly Shewanella spp.

This study more than doubles the number of known B1 metallo-β-lactamases. As with the study by Boulund et al. (2) which we published last month on computational discovery of novel fluoroquinolone resistance genes (which used a very similar approach but on a completely different type of genes), this study also supports the hypothesis that environmental bacterial communities act as sources of uncharacterized antibiotic resistance genes (3-7). Fanny have done a fantastic job on this paper, and I highly recommend reading it in its entirety (it’s open access so you have virtually no excuse not to). It can be found here.

BMC Genomics today published a paper first-authored by my long-time colleague Fredrik Boulund, which describes a computational screen of genomes and metagenomes for novel qnr fluoroquinolone resistance genes (1). The study makes use of Fredrik’s well-designed and updated qnr-prediction pipeline, but in contrast to his previous publication based on the pipeline from 2012 (2), we here study a 20-fold larger dataset of almost 13 terabases of sequence data. Based on this data, the pipeline predicted 611 putative qnr genes, including all previously described plasmid-mediated qnr gene families. 20 of the predicted genes were previously undescribed, and of these nine were selected for experimental validation. Six of those tested genes improved the survivability under ciprofloxacin exposure when expressed in Escherichia coli. The study shows that qnr genes are almost ubiquitous in environmental microbial communities. This study also lends further credibility to the hypothesis that environmental bacterial communities can act as sources of previously uncharacterized antibiotic resistance genes (3-7). The study can be read in its entirety here.